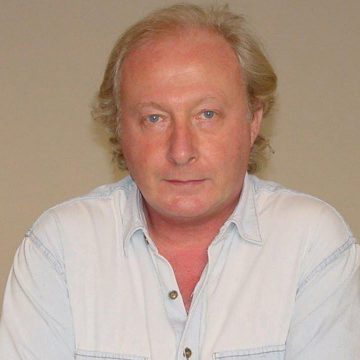 Ken Barrett is the author of 22 Walks in Bangkok: Exploring the City’s Back Lanes and Byways, available from all major international booksellers.

A. What is an area along Bangkok River that you have enjoyed exploring?

Captain Bush Lane and the nearby blocks contain a wealth of history. This stretch of the riverbank is where Bangkok’s European community settled in the middle of the 19th century, when the signing of the Bowring Treaty in 1855 opened Siam to Western trade.

B. What makes that area special to you?

Captain John Bush, an English sea captain, was a significant historical figure during King Rama IV’s reign. He arrived in 1857, two years after the treaty was signed, and already foreign ships were crowding into the harbour, which stretched all the way from Chinatown down past the point where we stand today. To bring order to the increasing chaos of the shipping, King Rama IV appointed the captain as Harbour Master, a position he held for thirty years, eventually retiring as Admiral John Bush of the Siam Royal Navy. Anna Leonowens, of Anna and the King of Siam fame, first met him when he sailed out to meet her incoming ship on the night of 15th March 1862. Anna, alone except for her six-year-old son, had been distraught to learn no one had arranged accommodation for her in Bangkok, but the kindly captain took her and the lad ashore and housed them in his riverside home on the narrow thoroughfare known today as Captain Bush Lane. These days, the location of his home is best known as the address of the Royal Orchid Sheraton Hotel & Towers.

C. What is the one of the best ways to explore that area?

Walking the streets on the riverside reveals much of the Old Bangkok that Captain Bush would have known. He would certainly have known the Portuguese Embassy, next door to the Sheraton (you can peep into the ambassador’s garden from the higher floors). The Portuguese have the longest association of any Western country with Thailand, and they have occupied this patch of land since 1820. The original British Embassy was built next door soon after the treaty signing, and occupied a huge area of land. In 1927, the government obtained the land from the embassy and built the General Post Office fronted by a statue of Prince Bhanurangsi Savangwongse. Beyond that are many other historic buildings.

D. What can someone following your tip expect to see?

There’s a wealth of hidden gems tucked away in the blocks south of Captain Bush Lane. An Italian architect named Joachim Grassi designed the Old Customs House, and when it opened it was one of the most splendid buildings in Bangkok. Today the massive building sags and rots. Follow the side lane that leads past the French Embassy and find a cluster of historic buildings that includes the Oriental hotel, the offices of the East Asiatic Company (whose owner had built the Oriental), and Assumption Cathedral. Wat Suan Plu is especially noted for its beautiful Rama V-era timber houses for the monks. Muslims from Java who arrived in the reign of Rama IV founded the tiny Ban Oou Mosque. Wat Yannawa has a chapel built by Rama III to resemble a Chinese cargo ship, a yannawa.

Exploring the riverside takes a long, hot yet fulfilling afternoon. After walks like these, I often find an establishment with a deck, order a refreshment and watch the rice barges and pleasure launches slip past, enjoying the fact that this is a view that Captain Bush will have known well and which hasn’t changed much in its essence since his time.