Asiatique is a classic example of warehouse resurrection and retrofitting for nightlife.

Around the turn of the century as Siam opened up to more sea trade, port facilities started appearing along the Chao Phraya River. Riding along the tail end of the Age of Sail was East Asiatic Company, a Denmark-based firm founded in 1897 to operate a Copenhagen-Bangkok shipping line. The company began constructing its own port, which came well equipped with many “godown”s. These warehouses eventually fell into disuse in 1947 before being resurrected as Asiatique in 2011.

Located in Bang Kho Laem district, Asiatique sits on 28 acres of riverfront land. It has kept the original layout of the port, with warehouses still clearly identifiable. Today, vendors fill these warehouses to the brim, offering visitors a variety of eateries, retail shops, and the most popular of them all: nightlife with live music. One can find many Bangkokians making a trip out to Asiatique to unwind with drinks and music in the evening near the riverside. Many often take advantage of the riverfront promenade to cool off with the breeze.

Asiatique holds a number of interesting activities one can do. Calypso, Bangkok’s well-known cabaret show, has two showtimes every night. Muay Thai Live turns sport into performance with five tales from Tuesday to Sunday. Asiatique Sky offers visitors an eye in the sky as the iconic Ferris wheel takes them upwards to see the horizon. One can skip traffic completely in getting to Asiatique – a private free shuttle takes night revelers from Sathorn Pier to its own private pier in a jiffy. 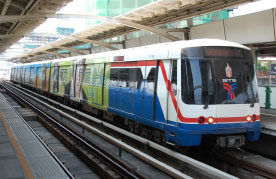 Take the Skytrain to Saphan Taksin Station, then take exit 1 or 2 to Sathorn Pier

The free Asiatique shuttle boat leaves from the third pier, beyond where the express and tourist boats depart.